One of the best things about the month of December is not the beginning of the winter season or furrylittlegnome’s birthday but the smell of Christmas trees!  Originating in Germany in the sixteenth century, the tradition of a Christmas tree has evolved over time.  Early Christmas trees were lit with candles.  The ornaments were not made of glass or plastic but were actually apples and nuts.  The most common Christmas trees are Balsam Firs and Fraser Firs – the latter found in the Eastern United States.

In America, the most photographed “Tannenbaum” – German for “Fir Tree”, is located in New York City’s Rockefeller Center. 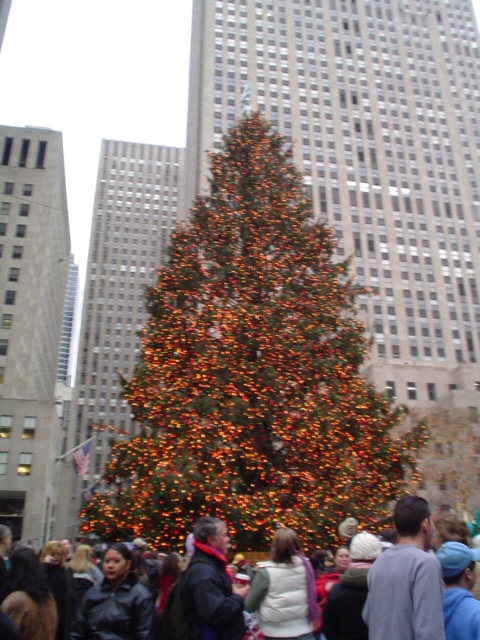 While reading the news online this morning, furrylittlegnome learned some interesting facts. While 88% of Americans will have a Christmas tree in their homes this season, 83% of these Christmas trees will be artificial or “fake”!

The tree below made its way home yesterday.  From a tree farm in Colchester, Vermont, this Fraser Fir cost $35 and is seven feet tall.  It will be decorated later today and stay that way until Epiphany.

In Brookline, Massachusetts, this Christmas tree came from a tree lot in town.  Priced at $45, this six feet tall Balsam Fir is also from Vermont!

In Dracut, Massachusetts, we find this decorated Fraser Fir that stands at seven feet!  The price for buying this Christmas tree at a local garden center?  Twenty-two dollars!  A steal!

As is custom in furrylittlegnome’s family household, the artificial Christmas tree, that is seven feet tall, is erected Thanksgiving afternoon.   This year, gnome’s four year-old niece took charge and with the aid of her grandfather’s height, she decorated the entire tree herself!  We can blame gnome’s brother for the artificial tree due to an allergy at an early age…