“Freedom is Not Free”

Furrylittlegnome has not visited Washington, D.C. in a few years, but with tension rising between North Korea and the rest of the world, gnome thought she would share with you a connection between her nation’s capital and her hometown.

Foggy Bottom. That is the subway stop furrylittlegnome always uses as a reference point. Not only is it next door to The George Washington University Hospital, but it is also where gnome catches the little shuttle that brings her to and from Georgetown – when she does not want to walk…

At Foggy Bottom, gnome and her pack, usually the author of Atleastimnotbitter, walk down NW 23rd Street. We walk past some government buildings, including the State Department, and end up in front of the Lincoln Memorial. 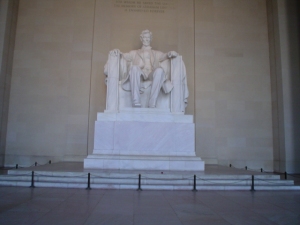 At ninety-six feet in height (thirty meters tall), this magnificent sight honors America’s 16th President. President Abraham Lincoln is facing the Reflecting Pool with the Washington Monument at the other end. However, close by, and to the right, is a newer memorial: the Korean War Veterans Memorial.

After World War II, and Japan’s surrender, Korea was split in half. North Korea was controlled by the Soviet Union and the South controlled by the USA and its allies. Led by General Douglas MacArthur, who commanded United Nations forces, over 300,000 American soldiers went into battle when North Korea invaded the south. Over 100,000 troops were wounded, and more than 30,000 Americans were killed. There are still thousands who are missing in action.

Dedicated in 1995, the Korean War Veterans Memorial commemorates American soldiers who served in the Korean War (1950 – 1953). In the form of a triangle, the memorial depicts nineteen soldiers, made of stainless steel, from various branches of the US military on patrol.

And the sculptor? Oh, it just happens to be a man who lives up the street in the same neighborhood furrylittlegnome grew up in: Frank C Gaylord.

6 Responses to “Freedom is Not Free”