Many people associate Salt Lake City, Utah, with the Mormon religion.  While it is true, Salt Lake City is centered around the Mormon faith, mixed within the Mormon Temple and church offices are a lot of interesting places to visit.   Thankfully for all of you, furrylittlegnome is here to show you what she saw.

Founded in 1847 by Brigham Young, a young Mormon from the Northeastern part of America, Salt Lake City is the capital of the western state of Utah.  Brigham Young and other Mormon pioneers were trying to escape the violence inflicted upon them from the rest of the country who frowned upon their faith.

A few quick facts:   Salt Lake City is run on a grid plan.  The streets run North, South, East and West.  Temple Square serves as the starting point.  Also, as you can see from furrylittlegnome’s photos below, Salt Lake City is full of smog! 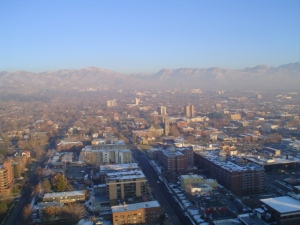 Caffeine is prohibited in the Mormon faith, and while gnome thought she would be suffering for three days without a cup of tea or a latte, she was pleasantly surprised to see that caffeinated beverages can be found everywhere!  Also, young Mormons on their missions greet you on the street and offer assistance in any way.

Check out The Lion House.  Built in 1856, The Lion House was built for Brigham Young and his large family. A polygamist, Young had two dozen wives and over fifty children!  It is now a bakery serving sweets and other baked goods.  Furrylittlegnome sampled quite a few slices of cake.

The Beehive House is also a former home of Brigham Young. This house, built in 1854, is a museum and shows what life was like in the 1800s.

Have you ever seen a city hall in America look like this?
This building in Salt Lake City is beautiful! 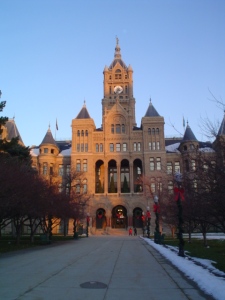 Of course, the main attraction is the Mormon Temple.  Imposing and luxurious, you can tour the grounds, but unless you are a qualified, baptized Mormon in good standing, you cannot go inside. 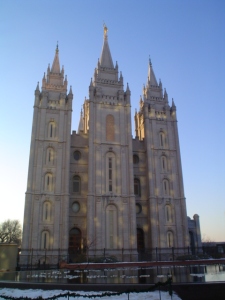 With The Pioneer Log Home and the Joseph Smith Memorial Building as other points of interest, anybody of any faith could come here and have a wonderful experience – and if not, travel the 45 minutes East to Park City!

11 Responses to Furrylittlegnome Heads Out West