When you visit London, one thing that stands out are all of the wonderful memorials and landmarks dedicated to the military and to members of the royal family scattered throughout this historical city.  When furrylittlegnome visits, she likes to make the Royal Borough of Kensington & Chelsea her home base, and located close by, in West London, is a spectacular display of affection towards Prince Albert – the Consort to Queen Victoria.

Married in St James’s Palace in February of 1840, Victoria and Albert were first cousins and madly in love.  He died of typhoid at Windsor Castle in December of 1861.  He was only 42 years old.

Queen Victoria mourned her husband’s loss for the rest of her life.  This was symbolized in her wearing black every day, and if you look at all of the railings in London, they are all painted black – at her instruction. 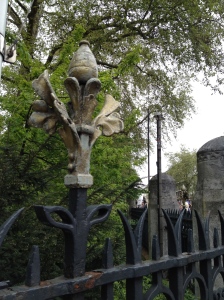 To this day, railings in London are black – an order by Queen Victoria after Albert’s death.

Located on Kensington Road, The Albert Memorial and Royal Albert Hall are across the street from one another, and just a few blocks away, on Exhibition Road, stands the Victoria & Albert Museum.

Approaching The Albert Memorial from Kensington Gardens. Royal Albert Hall is in the background.

The Albert Memorial  was commissioned by Queen Victoria shortly after her husband’s death and was completed in 1872.  The marble and bronze gothic structure is 176 feet high.  Sir George Gilbert Scott served as the architect. 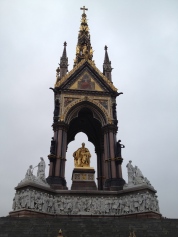 Queen Victoria opened Royal Albert Hall in 1871.  Still in operation, this concert hall hosts a variety of musical, theater and even sporting events. 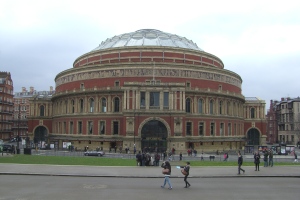 Outliving her husband by 40 years, Queen Victoria died in January of 1901 at Osborne House in the Isle of Wight.  She was 81 years old.

5 Responses to Victoria and Albert