Furrylittlegnome found herself here to watch the Staples Champions Cup.  Upon entering the TD Garden after a horrific cab ride in the pouring rain, she and her pack of gnomes were greeted by event staff – there were technical difficulties and the tennis matches would be at 8:30pm and not 7:30pm (EST).

The Staples Champions Cup is a tennis tournament featuring legendary players.  On this night, gnome would see “Pistol” Pete Sampras, John McEnroe, Jim Courier and Ivan Lendl.  Other players on the circuit include Andre Agassi and Michael Chang.  In each city the tournament is played, the four players play one set in a semi-final with each winner meeting in the final.  Each win equals points, and at the end of the tournament, the player with the most points wins $1,000,000.  For the record, Pete Sampras is on top of the leader’s board.

When we took our seats, we noticed there was no court, no net, nothing – except for wooden boxes.  There were lots of empty seats, and gnome was hoping for a Kim Sears or Pippa Middleton kind of crowd, but instead, it was a very casual one.  Then, came the evening’s host (someone from The Tennis Channel) with the news.  Apparently, the tennis court that was used in Chicago a few days before became lost and wasn’t located until 3:30pm Friday afternoon.  After the truck received a state police escort, once it made it over the Massachusetts line, it had just arrived at the venue.  For the next two hours, furrylittlegnome watched the event staff put together the tennis court… 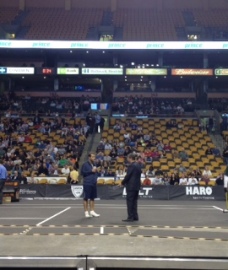 While some may have been a bit peeved at the wait, it was actually quite fun.  Jim Courier, Pete Sampras and John McEnroe graciously came to the floor as event staff worked around them for a Q & A session with the fans!

Finally, at 9:30pm, the action began! Semi-final #1 would pit Ivan Lendl (Andy Murray’s coach) against John McEnroe.   A crowd favorite, McEnroe showcased his talents.  In typical fashion, the tennis pro turned tv commentator slammed his racket to the ground a few times and even managed to tell a heckler to shut up.  He easily defeated Lendl 6-2.

Semi-final #2 consisted of “the great one” – Pete Sampras vs Jim Courier.  Sampras’s serve was strong and he proved to still be quick and agile on his feet.  Jim Courier was just as quick but was no match for Sampras as he went down in defeat by a score of 6-3.

The stage was set for the final.  It would be McEnroe vs Sampras – furrylittlegnome’s dream match up of the evening.  After a couple of aces and some great volleys, it was clear:  Sampras could not be beat.  Around 11:25pm, our night of tennis was over, and Pete Sampras had triumphed 6-1.  All that was left was the interview and the signing of a few autographs.

2 Responses to Sampras vs McEnroe?