Squares Around the World

Furrylittlegnome loves to travel.  When she was thinking about what to blog about this week, she had many locations in mind.  Then, it came to her.  What do places in America and beyond have in common?  Squares!

Built in 1868, Parliament Square has impressive statues of worldwide politicians that include Winston Churchill, Nelson Mandela and Abraham Lincoln.  The Houses of Parliament are to its left and to its right is Whitehall – the long walk up Whitehall leads to Trafalgar Square with its fountain and the National Gallery.

Heading east, Romerberg Square in Frankfurt, Germany’s old town made this gnome green with envy.  It was her first taste of “old” Europe.

The Romer (middle building) has served as City Hall since 1405.

The Romerberg: Destroyed in World War II (March of 1944), these timber buildings were recreated to their original design that were houses in the fifteenth and sixteenth centuries 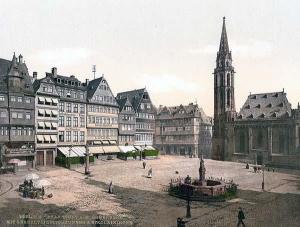 Made of bronze in 1611, the Fountain of Justice is in the middle of Romerberg Square.

Belgium is known around the world for its chocolate, waffles and beer, but this small country is also home to two great squares.  Grand Place in Brussels is large and luxurious.  Filled with guilded buildings, Grand Place is a central meeting point.  Here, you can find a five-star hotel, art galleries, souvenir shops and the town hall.

Market Square in Bruges is a magnificient site that dates back to 958! 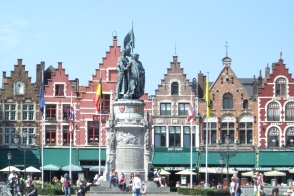 Next stop, a couple of cities in America.  Our first visit is to Jackson Square in New Orleans, Louisiana.  A year after Hurricane Katrina hit the area, furrylittlegnome wanted to see the devestation for herself. 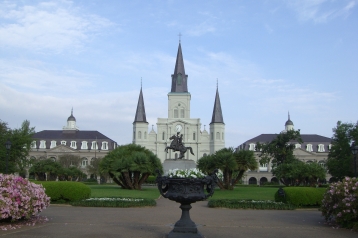 With a lot of destruction still visible in this city, Jackson Square was beautiful and clean as a whistle.

Heading west, we venture to Portland, Oregon where Pioneer Courthouse Square is the main attraction for visitors.  A word to the wise, Portland has scenic views, but in furrylittlegnome’s eyes, that’s about it. 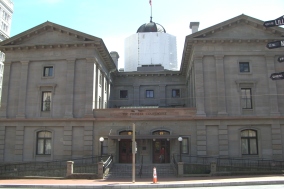 Staying out west, Salt Lake City, Utah is home to Temple Square.  Consisting of ten acres, in downtown Salt Lake City, Temple Square is the headquarters of the Church of Latter-day Saints (the Mormon faith) and is home to the iconic Salt Lake City Temple, the Tabernacle and the Joseph Smith Memorial Building.   This city is worth visiting, however, gnome was fortunate to have a friend who is Mormon to show her around which made for a more in depth experience. 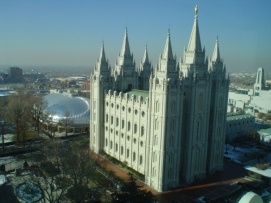 Hope you enjoyed our little jaunt around the world in squares.  Do you have a favorite one that furrylittlegnome didn’t mention?

4 Responses to Squares Around the World