How the Other Half Lives (Part 2)

The last time furrylittlegnome posted, she was interrupted by an announcement in the Virgin Atlantic clubhouse that her flight from Boston to London was boarding. She was very excited to experience upper class and all of its amenities, and ladies and gentlemen, furrylittlegnome was not disappointed!

As she boarded, gnome noticed right away that the seats were not what one would expect. The set up was houndstooth style – you really could not look out the window, but every passenger was guaranteed an aisle seat! 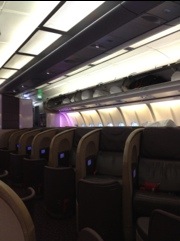 The seat was bigger than gnome expected and there were lots of gadgets on a panel to her right that would keep her occupied throughout the flight. Popular movies, music and television shows from the US and UK were available to watch. There was also iMap – one could track everything about their flight including its current location, temperature, time in the air, etc. 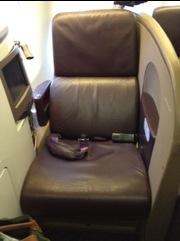 After a glass of champagne, Linsey, our flight attendant, passed out pajamas. Needless to say, the “small” was still too big for furrylittlegnome. Our goodie bag contained socks, ear plugs, a toothbrush, toothpaste and a shoe bag. Someone back home will be getting a souvenir! 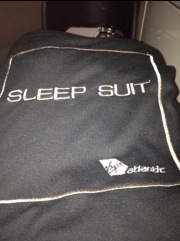 After a few minutes in the air, menus were distributed for the evening meal. Gnome chose the beef option which came with potato, carrots and green beans. Her table was set eloquently – more so than her own kitchen table at home. The presentation of her dinner was lovely and it tasted quite good. 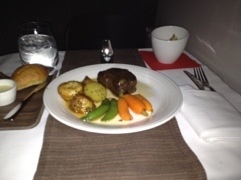 After listening to some music and watching a few episodes of “Modern Family” and a documentary about the queen, furrylittlegnome got sleepy. She pressed a button for service, and before she knew it, Linsey had turned her seat into a bed! The duvet kept her warm and the length of the bed made it easy for gnome to comfortably stretch out. 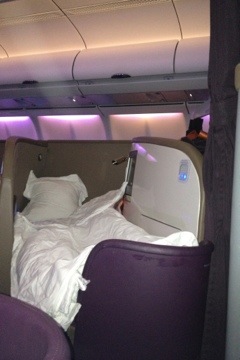 Gnome woke a few hours later to an announcement from the flight deck that we were to begin our descent into London’s Heathrow airport. Her bed was turned back into a chair and she was offered a beverage (she slept through breakfast).

After a smooth landing and given a hot pink priority pass to get through the immigration line more quickly, furrylittlegnome was off to claim her luggage and to freshen up at the Virgin Atlantic Revivals Lounge where she had a long hot shower, her nails done and enjoyed a full breakfast before being whisked away to central London. 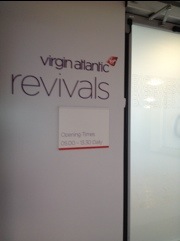 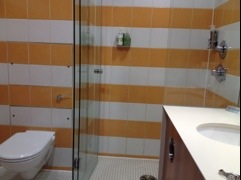 Furrylittlegnome can only hope the flight home in a few days mirrors this one! 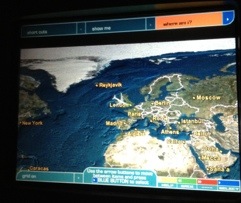 2 Responses to How the Other Half Lives (Part 2)