Furrylittlegnome is ecstatic!  As she made her way into the kitchen and opened the refrigerator door at her parents house in Vermont, her eyes were immediately drawn to the top shelf.  There, she saw orange and her father’s favorite soda: Moxie!  As many of you know, this gnome is a proud Vermonter, however, she must thank the state of Maine for this discovery. 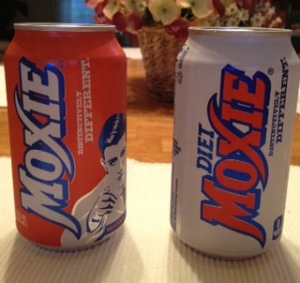 Patented in the 1880s, by Dr. Augustin Thompson of Union, Maine, Moxie was first a medicine that was thought to be effective against paralysis and brain disorders.  It was dubbed “Moxie Nerve Food”.  A few years later, the soft drink craze began and soda water was added to the ingredients which turned Moxie into a beverage and no longer a medicine.  The soda was a huge hit in the 1920s and was more popular than coca-cola during that time.

Chances are, if you are not from the Northeastern part of the United States, you probably have never heard of Moxie – as it always stayed a regional beverage.  The taste has a caramel flavor and is, both, bitter and sweet.

Who besides furrylittlegnome’s father would call Moxie their favorite soft drink? President Calvin Coolidge and Ted Williams of Boston Red Sox fame are just a few.

A fan of Moxie and planning on visiting Maine this summer? Well, you are in luck. Gnome has been notified by a friend who happens to reside in “Vacationland” that the Moxie Festival takes place every July in Lisbon!